«Art is a lie that makes us realize truth»

You will never be able to replicate this experience again. The strong presence of Andy Warhol, Pablo Picasso, Lucio Fontana and many other major artists’ pieces from the 20th century is just the tip of the iceberg. A powerful combination between whole decades of history, culture, feelings, emotions and cultural movements is what makes this art gallery so unique. Here’s why you must visit Foggia’s Art Gallery in Michelangelo Avenue, 65, managed by Giuseppe Benvenuto. The exhibition is open from Monday to Saturday, from 10:30 – 13:00 / 16:30 – 20:30. There’s a lot to see but do not be afraid! Apulian Appeal has personally picked some of the exhibition art pieces to introduce you to the main protagonists of the gallery.

The exhibition is divided into multiple sections, each of which describes the different periods art went through during the 20th century. As you step in into the gallery, on the black wall on your left you can find up to eight art pieces which enclose the commitment of art on describing the virtues of a hidden society. 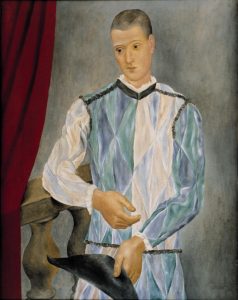 Held inside a golden-colored frame, Picasso’s Harlequin stands out immediately. Painted in 1966, Harlqeuin perfectly depicts the rejection of the moral values of that period: art is also something which can represent the other side of reality, and so the always happy mask-character is represented, this time, with a melancholic and thoughtful gaze, along with other dramatic features such as the brilliant red drape behind the subject. Another interesting trait of the painting is its ability to enclose Picasso’s artistic childhood and adulthood, as you can notice by the presence of Realistic and Dadaistic features.

Harlequin is certainly surrounded by a melancholic aura, but he’s not alone: many other pieces of art share his same place in the exhibition. However, we’ll take a look at them later. Carrying on the path on the right, Picasso’s masterpiece is followed by the groundbreaking ‘70s Pop Art genius Andy Warhol. 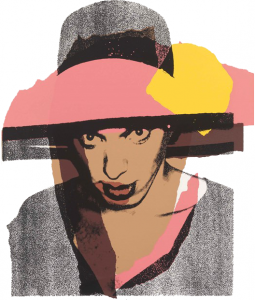 No more Marilyn Monroe, no more Elvis Presley. The world of celebrities must be left behind in order to make space for the real world, the one of socially marginalized people. Here you can find the portrait of a drag queen from New York’s night club “The Gilded Grape” during 1975. In a period where almost everything was considered a taboo, the drag queens who previously did not have a place in art history, do have one now.

The subject of this work is photographed frontally, looking directly into the eyes of the viewer, with a bold gaze which communicates both challenge and pride. In this work, Andy Warhol first captures the protagonist with a polaroid and then proceeds to create a silkscreen print adding large sections of colors, concealing part of the figure and the background.

The arrangement of the exposed pieces in the room is everything but casual. If on the left side of the room there are works which represent a centuries-old hidden society, on right side you can find the purest school of artistical and conceptual experimentation. It has found its place in mid-twentieth century Italy with Lucio Fontana, Alberto Burri, and Enrico Castellani. 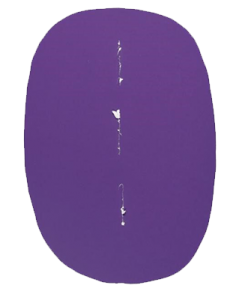 Along with the creation of the White Manifesto, Lucio Fontana redesigns the concept of art: from now on, «matter, color, sound and motion» will be the protagonists of his works. In other words, the canvas itself is the direct subject of his thoughts, ideas and works. Here in the gallery, you can find Fontana’s “Concetto spaziale” from 1965, a silkscreen print which includes the holes on the canvas which Fontana was famous for.

The absence of linearity and symmetry is also an indistinguishable feature from the majority of his works. In particular, this piece perfectly embodies the desire to communicate speed, impulse and three-dimensionality. 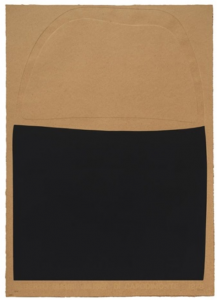 The idea of spatialism, and so the concept of giving a dimension to a flat surface, does not extend itself on the single art piece; rather, the entire area you’re in. After taking a step back, next to Picasso’s Harlequin, you will find Alberto Burri’s screenprint “Museo di Capodimonte” from 1978.

Burri was not famous for his impressive and gargantuan land art as much as he was for the way he used to deal with canvas. Etches, slashes, combustion techniques and the inclusion of introflexed and extroverted surfaces was at the center of his works and his way of perceiving and communicating art, thoughts and emotions. 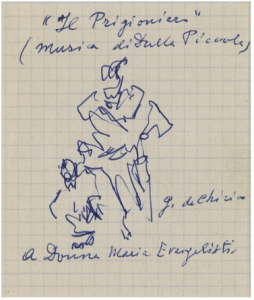 Next to Burri’s timeless art piece, we find an “informal” work by De Chirico. The critics and the audience are extremely used to looking at and observing artworksin their final stage, ignoring at first the whole process of ideas, thoughts and emotions that goes through the artist’s mind. Quite the opposite, the Italian metaphysician artist Giorgio de Chirico left one of his drafts from 1964 untouched, as it is in the majority of his works. Everything on “Biro su carta” is made for the purpose of communicating through a primitive language: the doodle. As you can notice, even the canvas is just an informal piece of squared notebook on which the drawing finds its way, along with the representation of a musical theatrical work “il Prigioniero” (The Prisoner). 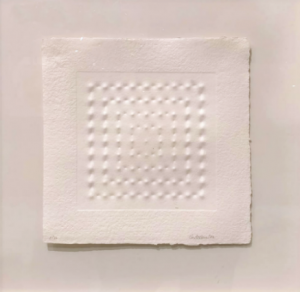 Moving back to the right side of the room, you can lay your eyes on two pieces of art by Enrico Castellani, labeled by many critics as “the father of the minimalistic cultural movement”. Both of them follow the same path that was drawn by Fontana, extending the dimensionality of flat canvases with the creation of shapes and colors.

As it is shown in his work “Superficie Bianca”, Castellani boosted the character of the flat surface through extraordinary plays of light and shadows.

Previously, we pointed out how major artists depicted their thoughts by taking well-known characters, or unknown figures, and attaching them into unusual contexts and shapes; the way this was done was subtle and addressed to the few rich or educated people. Now instead we are going to encounter the epoch of public outcry, an historical moment in which making a certain type of artwork became synonym of internal and external class struggle. Thanks to Keith Haring, Mario Schifano, Man Ray and many others, the shrieking of the unheard becomes tangible. 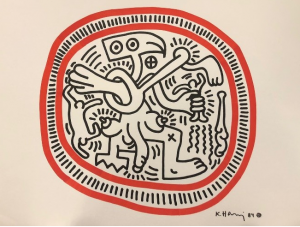 The influence Haring had on today’s pop culture is something never seen before. His unique style is characterized by the strong presence of round shaped stick figures and kinetic lines which give harmony to his drawings. In this untitled work, the American artist drew androgynous features enclosed in one big anthropomorphic creature; since Keith Haring came out as gay almost in the same period, this picture is one of the several drawings that he made to promote sex education along with AIDS sensibilization campaigns. 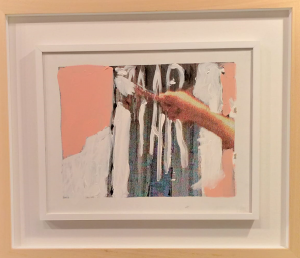 As a last piece of Apulian Appeal’s introduction to the world’s major icons from the 20th century, you can find what is most likely the most valuable exposed artwork by “the Italian Andy Warhol”. With “The making off – Rio De Janeiro”, Mario Schifano boldly points out the hypocrisy of the Brazilian dictatorship by painting a favela (a slum) in white, in contrast with Brazilian Government’s will to have them painted exclusively with green varnish in order to make them “invisible”. The work is done with enamels and acrylics on computer prepared canvas. It is an extracted frame from Schifano’s documentary which is fully available on YouTube and has the same name as the painting.

The exhibition is full of other wonderful art pieces and areas to visit. Don’t be afraid of asking for further information! The experienced gallerist and curator Giuseppe Benvenuto will be glad to answer to any questions. 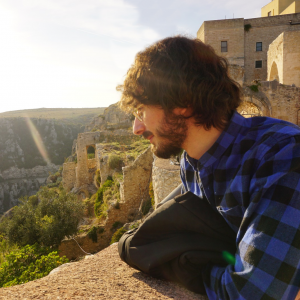 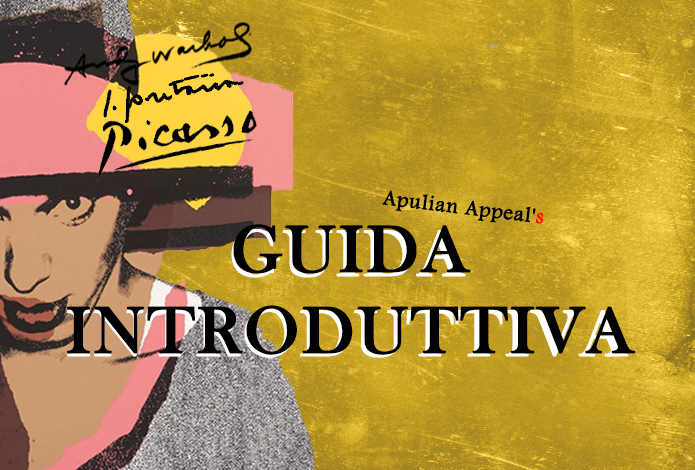 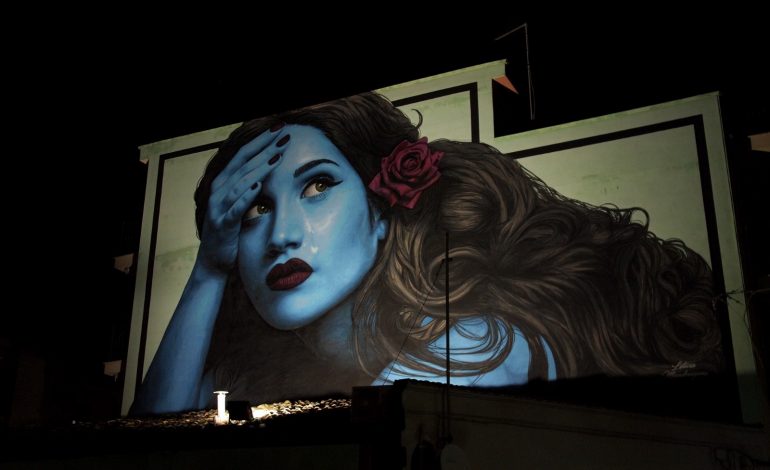